So last friday I tested out the new Impossible Project Polaroid replacement film. As soon as it came in too Fat Buddha in Glasgow,I wanted to try it out.
I had followed what Kevin at Garage Studios has done with the PX100,even thought the cameras are diffrent the film should be very similar.

As much as I love shooting digital,there's this facination with instant film that I love. Something about taking the picture and then a few mintues later you have a hard copy in your hand. 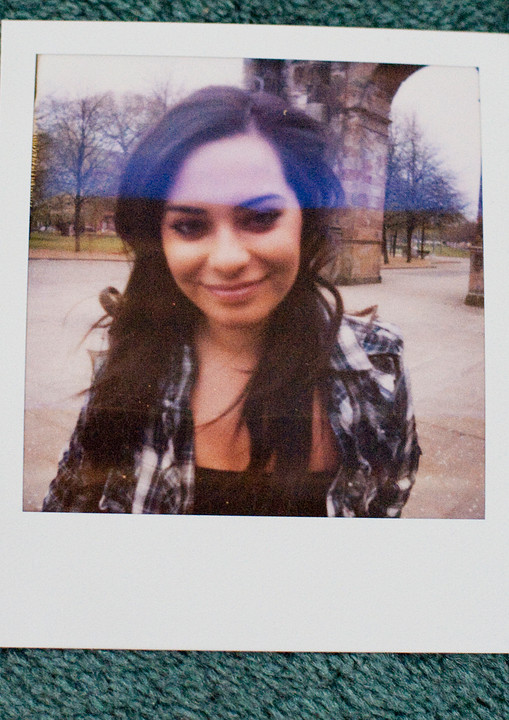 Its a shame polaroid stopped making film but when this project was announced last year I was super happy that maybe some time soon I too would be using polaroids again.

So at £25 a pack for 8 shots I was expecting good results,but having already saw what Kevin had got with his I was a little unsure If I was going to get anything better or like the old Polaroid color film I have used.

Having kindly been gifted a Polaroid 600 Camera by Danny Gartside,I was ready to go.

The following test turned out nothing like I was hoping though. I followed the process for developing as the film is very sensitive to light and heat these can also be factors in the way that it turn out too.

The massive problem is though that light is a big factor and you need to cover the shot as soon as it comes out the camera,I managed to work out a good way to do this and with my black developing bag i was off.(The Bag isnt anything special either its a black none see through carrier bag,technical is what your thinking I know)

Another issue as I mentioned is that heat can also affect it too,so if its too hot or too hot you can get pictures just not turning out. The temp that your meant to shoot at is between 17 degrees and 24 Degrees C Which is fine if you live in a good climate where its that kinda of temp all the time,Im the uk or scotland where I am I just isn't like that.

So apart from these hurdle you would think it would be easy well not yet it isnt. Theres a list of steps that need to followed but as you use the film and become use to it,I think you pick up your own techniques.While still following impossibles guidelines.

On this day I shot outside,the day was cloudy but bright and temperture wise it wasnt too cool either,I also used flash and no flash too.I shot against various items ie walls,trees and just in open space and seemed to get the same results from both packs. NOTHING. 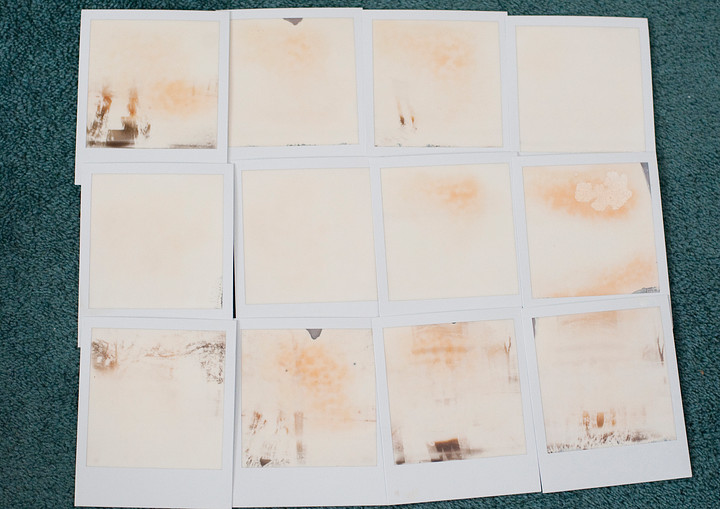 Yep no one picture from the shoot came out 14 shots,all white or with very very slight detail. Nothing that you can make out out. To say I was dissaponited was a understatement.I under stand that there is 12 in the picture above but the lat two where the same,I think you get the picture.

As you can see in the pictures there was two that kinda turned out both had diffrent ways though and both where took inside at room temp and all that jazz. Below is these two 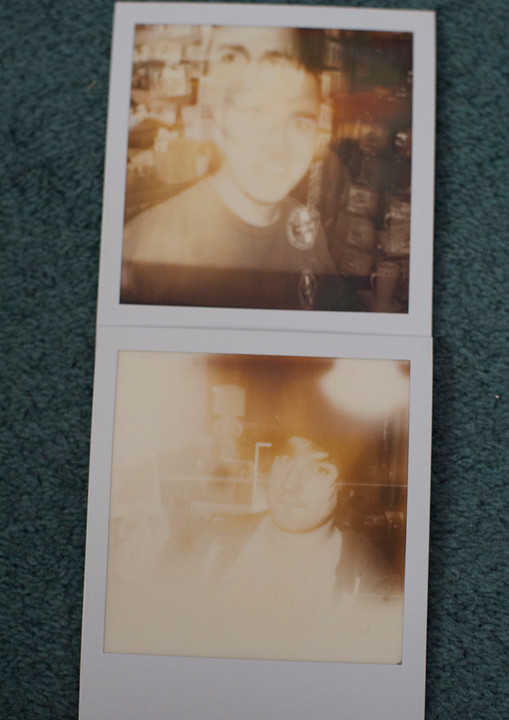 Personally at the time I was sure that it wasn't a finished process but it seems that is the finished product although now I have used around 8 packs its still a hit or miss situation with the film,I have had some really nice results but I also have had about 50% not come out and its never consitent the problems. One pack every picture came out really really dark with little to no detail and i shot in diffrent lights sources/outside/inside and with flash.

The only good thing about it so far was that The Impossible Project have offered to help me out with 2 packs that had spoilt although I am just to contact them about the other 2 packs yet.

I think as of yet as much as the results can be nice,its a very expensive experiment,as you dont know if you are going to get a good pack or bad pack.
Which is the major problem for me,Having to spend £20 odd on a pack of film to have none turn out is going to get people turning there back on the product quickly.

Me,Not yet have I turned my back but as a feasible backup Fuji Instax seems to be the ticket at present. The pics are nearly the same as polaroid and the results seem consistant plus they are color too.

Im gonna blog again soon about this film and hopefully next time I can say that all the results are like old polaroid,I think that maybe some time off yet though

Leslie @ Fat Buddha - For the film and being a allround good guy. Check out his shop,its really cool and not only does it sell polaroid stuff but lomo and lots of cool other brands too

Stephen Rowan too not to forget.

So Im back just over a week now. Still seems like it was yesterday.
The drive was long but it was such good crack,even if the weather was shit to say the least.

Cathro done great and Joe was unlucky but Im sure that the two of them are gonna smash it at Fort William in 2 weeks tho.

Onto my photos tho,for the first 2 days I was having a hard time. Just couldnt get into it. Dunno what it was really,but on the sunday i was pretty happy with my results. After gettin myself together.

The only real bad thing that happened was that some decided to steal 3 expensive jacket,some race kit and all the tools.

I have a back catalogue of blogs to do. Next up in my polaroid / Impossible Project film and I promise its a cracker... 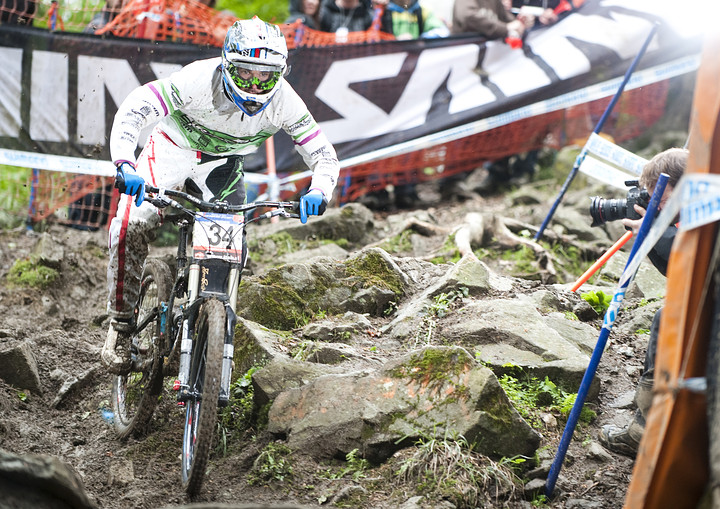 So on Day 2 but im actually on Day 3. Friday was good,it was dry and the weather held up even though it looked like it was going to chuck it down at any present moment. And having a extremely sore ankle from my antics yesterday didn't help much either.

Today was slightly different. Having been woke to the sound of rain on the van.It wasn't the most promising of starts...
When I managed to claw myself of bed,I ventured to the hill,the very sloppy,wet messy hill.

So not only was it still raining but I managed to get a nice shower from some mud too.
Good day all round,I must say and my two mates qualified very respectably too,so I'm pretty happy about that too... 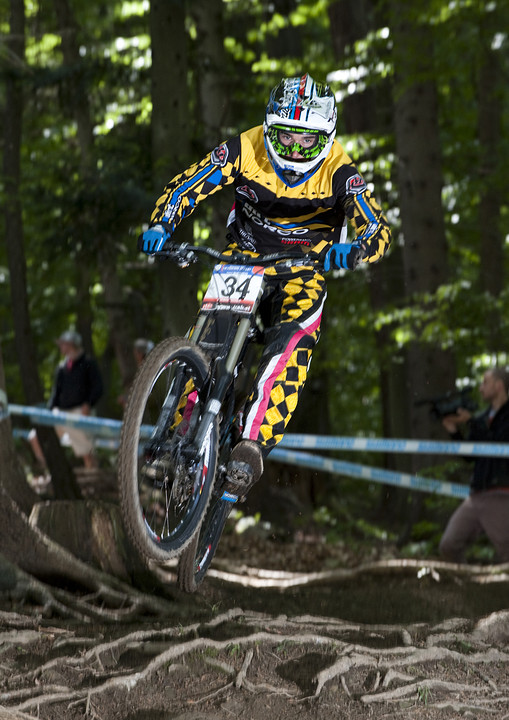 So i'm out in Maribor,Solvenia for the 1st Round of the Downhill/4X Mountain Bike World Cup. Me,Joe Barnes,Ben Cathro and Young Williamson trucked it all the way here that was after 23 hours and a very scary experience on the german autobahn. I do love driving though.

Its full of lizards,a pretty steep and sketchy rock garden and some sweet sunglasses.

Plus with added Gorillas in the mist too.

Tommorrows when the real photos happen though 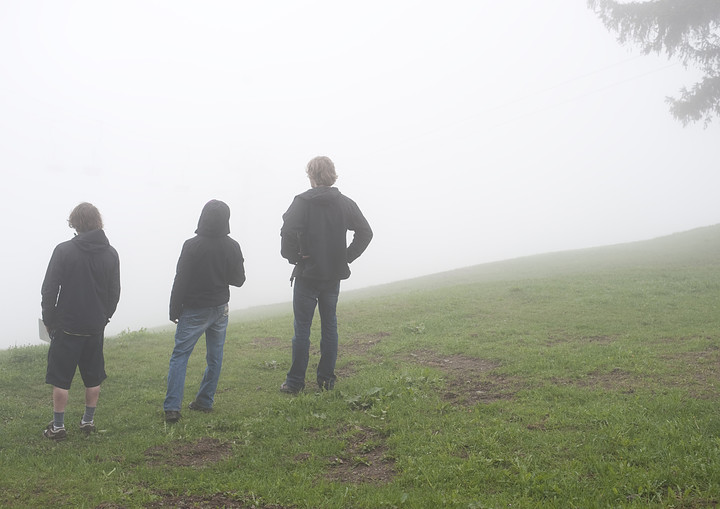 Having saw these guys at the NME Tour at the Barrowlands in Glasgow recently. So when they came to glasgow,I thought I would take a gander down and see how they are. The gig was sold out and it was packed to the rafters once they came on. 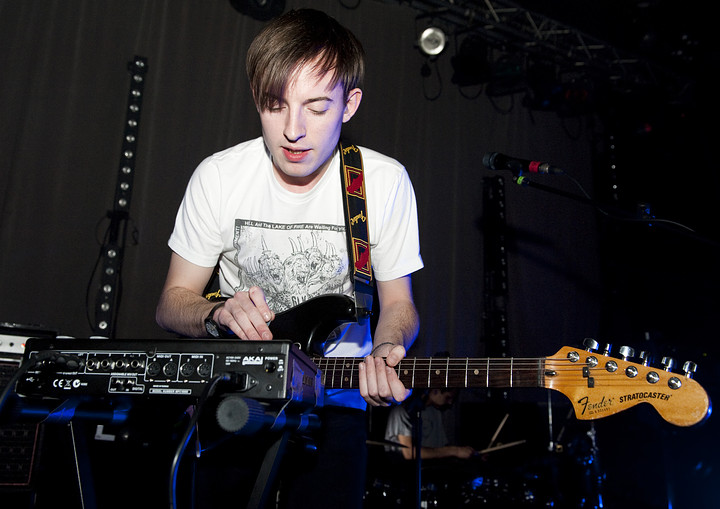 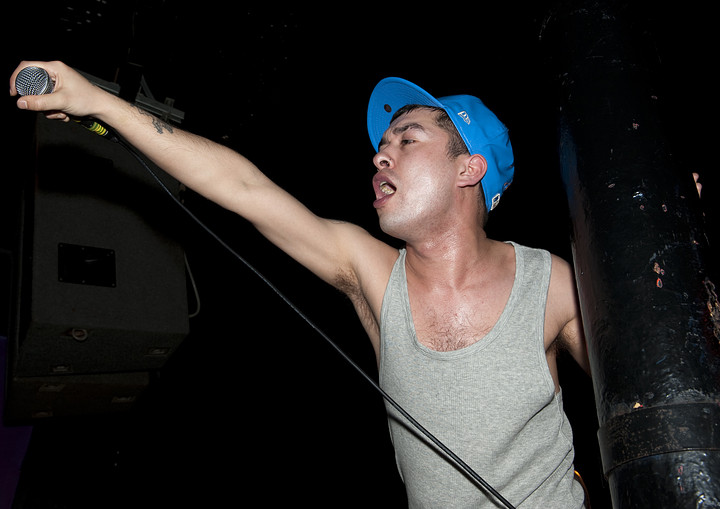 So I have been a little lacking on the blog front recently, Just kinda getting stuck with stuff and then more stuff on top.

I cant really say that much apart from that it was real fun shooting this.

I had the full gig,I could use flash. So instead of shooting on the camera I went for some off camera stuff and was really happy with some of the results that I got. Its the way forward for sure,shame that bands and pr's haven't got it totally yet.

I nearly have my mega Polaroid blog finished,Just got the photos to get done and that it really. You'll hopefully enjoy that.

Till then thanks for reading as always. 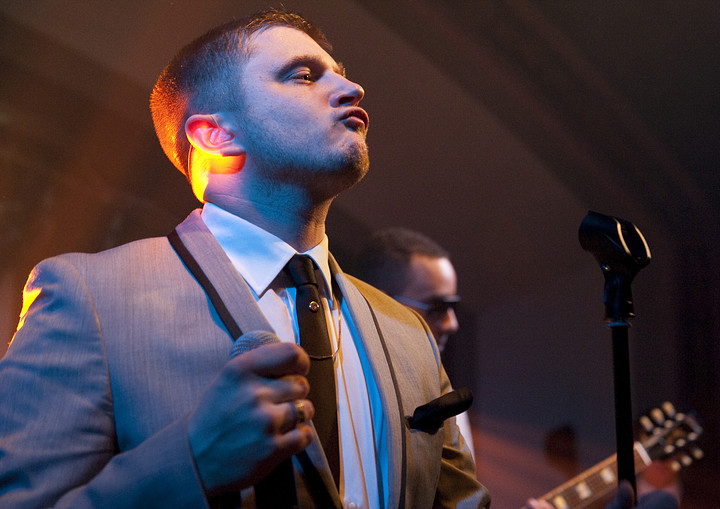 Have listened to his new Album a few weeks ago,I was quite excited when I was asked to go to the gig. When I got there it was like a under 14.
I felt old...

It was a diffrent scene when he came out as he was very polished and nothing like how he was in the Harry Brown,one of my favourite films of recent times. 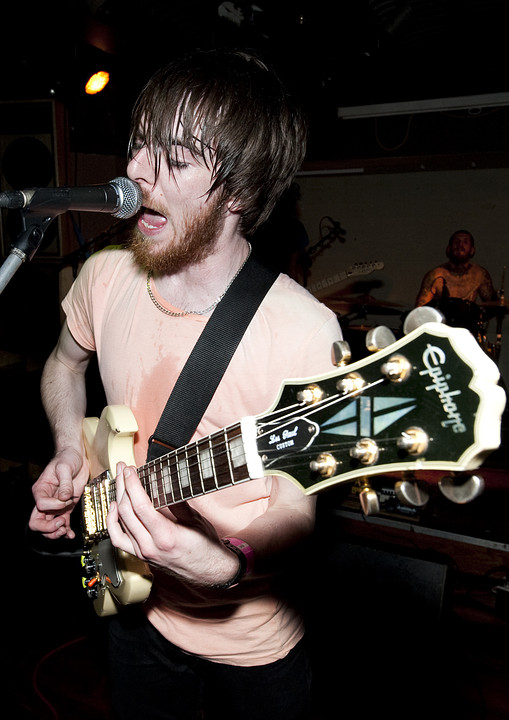 So a few weeks I shoot Hinterland in Glasgow. Out of the Full bill Pulled Apart By Horses Where the band that I most wanted to shoot. Last time they were in Glasgow,I missed them due to I think Them Crooked Vultures. So this time I made a point of shooting them.

Hinterland itself wasn't the best organised in my opinion,Every photographer has a Photo Pass that said AAA on. Even though it was a AAA Pass? Dunno why... There was other reasons but I'm not gonna moan about it on here..

Apart from that I had fun,it was relaxed.
Back to the subject though Pulled Apart By Horses where immense. Really brillant live,was a shame that only a small crowd witnessed it.
If they come to your town be sure to check them out....

They killed it in The Admiral. Just Awesome!!! 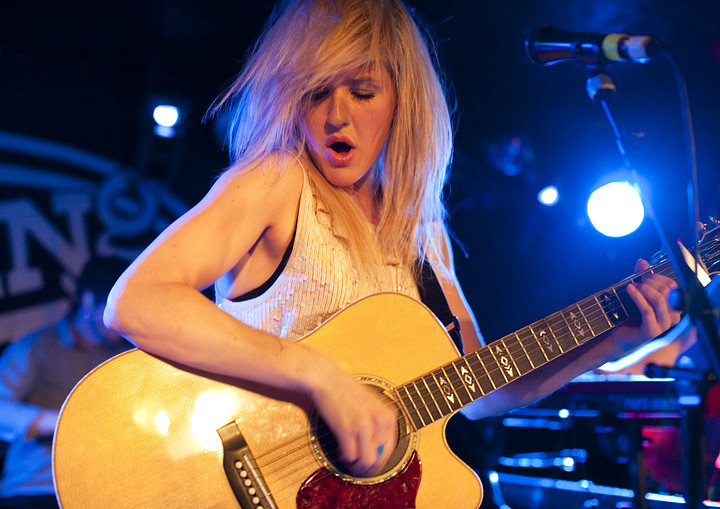 So I shoot this like two weeks ago but with it being published and then this week beginning crazy I haven't had a chance to do this.

Well were shall I start having being allowed 1 song to shoot,I was hoping the light was gonna be good.It wasn't bad and a little pressure never hurt anyone,did it?
I was quite happy with the few I got in the short amount of time. Also this week I shot Pulled Apart By Horses which I was really looking forward too.

More on that in the next installment until then that's all folks...

That Drummer That Dj // Paisley Union 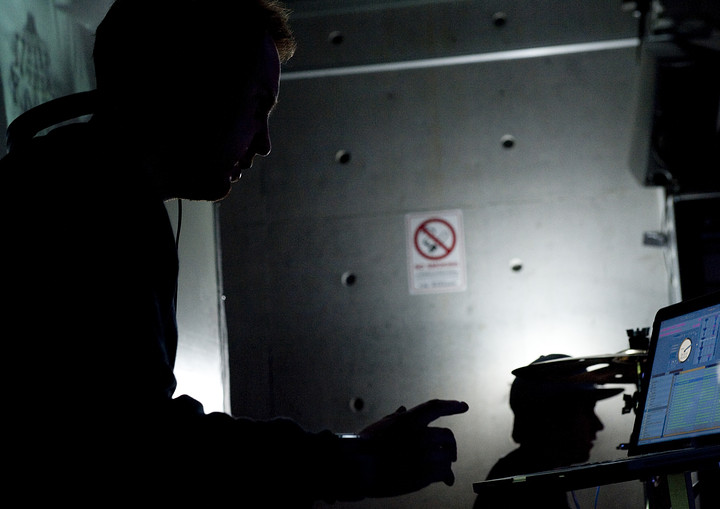 So I travelled all the way to Paisley after missing the turn off and having to detour 4 miles and turn back,I finally got there.
With plenty of time to spare. Also in attendance was my mate Max Clifford the Pr Guru of Glasgow,who I must admit looked like Robert De Niro Out of Taxi Driver. Awesome is the only word to describe that!

So onto the show,I was real excited to be seeing it again. Its something totally different to the usual stuff i'm seeing and tonight I tried off camera flash for a change too.
I was happy with the results but will change the way I set up the flashes next time.
Trial and error innit.

Got some really cool stuff coming up in the next few week,Proper excited! 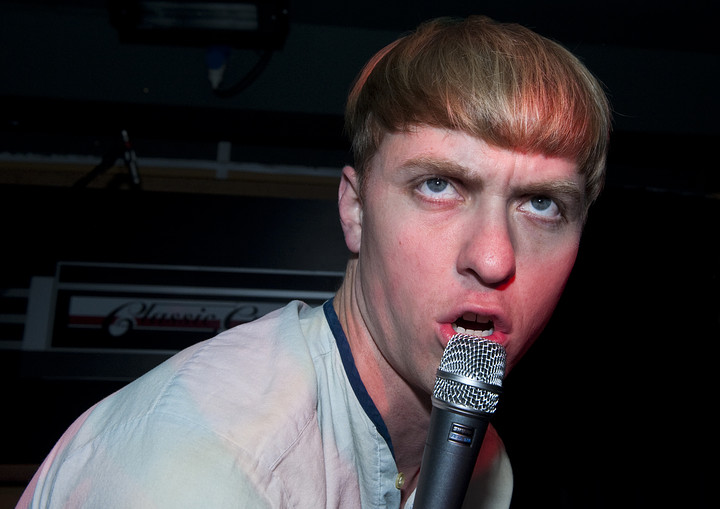 So I shot The Drums on Monday night at The Classic Grand,Glasgow. Having saw them at the NME Tour not too long ago I was pretty excited to see them again.
The Pit was so tiny infact it was more a barrier with 2" in front add to that 5 Photographers so it was a bit of a squeeze too. And lets not forgot the old"I forgot to pay the electricity bill,so we shall light the band with a candle" so I cracked out the old flash and was flashin right,left and centre.

I'm gonna have a click link to the set once I figure out how to do that,which will take you to other from the other night.But just now I have only gifted you guys one.

Well after a long time and loads of hard work my site is finally live.

The mastermind behind the scenes that created this monster was Andrew Kendall,and I think he has done a amazing job to boot too.

I will be updating this a hell of a lot more than my flickr now,but I will still keep it adding the odd item or two to it.